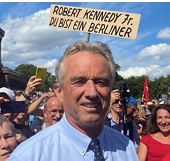 Although Robert Kennedy Jr. denounced his fellow Eco-Fascist, Peter Daszak for his ostensible work on developing vaccines, RFK Jr., an enviornmental lawyer, intent on protecting animal species, has a lot in common with him: RFK Jr. carries out his hidden depopulation agenda by opposing vaccinations with his Children's Health Defense Organization non-profit Daszak uses the Eco-Health Alliance, also a non-profit. Both men have ties to Nazis; in RFK Jr.'s case it's with the AfD, (Alternative For Deutschland) the reincarnation of the German Nazi party. AfD co-sponsored one of RFK Jr.'s Berlin anti-Covid-19 vaccination speeches. During the Nazi era in Germany various pieces of legislation relating to the protection of the environment and animals were approved, some of which can still be considered progressive today. Daszak is the son-of-a heartless Nazi death camp executioner who volunteered for the role murdering God knows how many Jews and fullfilling his Nazi genocidal dreams. Daszak was indoctrinated in Nazi thought by his father, Bohdan Daszak, a rabid anti-Semite and member the OUN Youth, (Organization of Ukrainian Nazis or "Nationalists"). Where RFK Jr. get so demented: "Vaccinations cause dystonia. REALITY: There is no evidence that vaccinations cause dystonia. The DMRF asked a panel of preeminent movement disorder experts to examine this closely several years ago when a story surfaced of a woman who claimed to have developed dystonia following a flu immunization. It was later established the dystonia diagnosis was not correct. In contrast, preliminary research suggests certain vaccinations may actually be protective against certain forms of dystonia. As with any medical procedure, the DMRF encourages individuals to discuss the risks and benefits of immunizations with their doctors.

Spasmodic dysphonia is thought to be caused by abnormal functioning in an area of the brain called the basal ganglia. The basal ganglia consist of several clusters of nerve cells deep inside the brain. They help coordinate movements of the muscles throughout the body. Recent research has found abnormalities in other regions of the brain, including the brainstem, the stalk-like part of the brain that connects to the spinal cord.

The #Chinese laboratory at the center of scrutiny over a potential #coronavirus leak has been using U.S. government money to carry out research on #bats from the caves which scientists believe are the original source of the deadly outbreak. @MailOnline https://t.co/AIvNGJxFtY

The minute they hand you that vaccine passport, every right that you have is transformed into a privilege contingent upon your obedience to arbitrary government dictates, he told a cheering crowd at a rally against vaccine mandates in Washington last month. It will make you a slave. His conduct undercuts 50 years of public health vaccine practice, and hes done it in a way Ive never see anyone else do it, said Michael T. Osterholm, the director of the Center for Infectious Disease Research and Policy at the University of Minnesota. He is among the most dangerous because of the credibility of who he is and what his family name has brought to this issue. Mr. Kennedy now says Sirhan B. Sirhan did not kill Mr. Kennedys father and has urged California parole commissioners to free him. He has repeated a popular conspiracy theory that 5G high speed transmission towers are being installed across the nation to harvest our data and control our behavior. In a best-selling new book, he claimed that Dr. Anthony S. Fauci, who is President Bidens top medical adviser for the coronavirus pandemic, and Bill Gates, the co-founder of Microsoft, were in cahoots with the pharmaceutical industry to profiteer off dangerous vaccines. He has amassed a significant following on social media, where he circulates what is often false information on the coronavirus and vaccines. Last year he was barred from Instagram, where he had 800,000 followers, for pushing misinformation in his attacks on the vaccine. His Facebook page, with more than 300,000 followers, remains online, as does his Twitter account, with over 405,000 followers. Kennedy invoked Anne Frank, the young German-Dutch diarist who died in a Nazi prison camp, as he compared government measures for containing the pandemic with the Holocaust at that rally in Washington. He later apologized for that. He struggled with heroin addiction and was arrested in South Dakota in 1983 for heroin possession. He enrolled in a treatment program and has been sober ever since, by his account; friends say he still tries to attend Alcoholics Anonymous meetings on most days. He also goes to Mass almost every Sunday. His second wife, Mary Richardson Kennedy, 52, hanged herself in a barn behind their home in Mount Kisco in Westchester County in 2012, after Mr. Kennedy had filed for divorce.